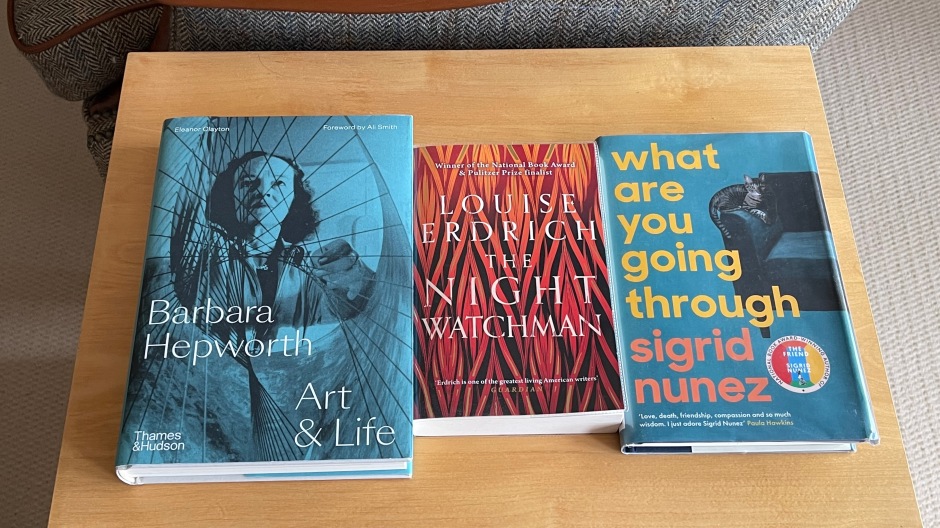 I’ve be AWOL from the Six Degrees meme, and indeed this blog in general, in recent months. But when I saw that the starting book for this month’s Six Degrees chain was one that I picked up from the library just a few days ago, it seemed like a sign to jump back in.

The Six Degrees From Separation meme is hosted by Kate at BooksAreMyFavouriteAndBest. Participants all start with the same book and provide a chain of links to six additional titles. It’s always fun to see how different everyone’s chain is.

This month we begin with What Are You Going Through by Sigrid Nunez. This is about a woman who is supporting a friend who has terminal cancer. I’ve read that despite this seemingly heavy subject-matter, it is a positive and uplifting read. We shall see.

For my first link, I am going with the other library book that I collected alongside the Nunez: The Night Watchman by Louise Erdrich. This has won the 2021 Pulitzer Prize and explores the rights and freedoms of Native Americans.

My second link is a rather obvious leap to a book with a similar title: The Night Watch by Sarah Waters. I remember reading and enjoying this when it first came out. It is the story of four Londoners during the blitz, one of whom, Kay, is an ambulance driver.

A female ambulance driver links me to my third title: Noonday by Pat Barker. This book is the third in Barker’s Life Class trilogy, the whole of which I found absolutely gripping. It is the fictionalised story of real-life artists who studied together at the Slade School of Art. In Noonday, we find main character Elinor forced to abandon her art practice in favour of helping out with the war effort, specifically by driving an ambulance.

I recently discovered David Boyd Haycock‘s book A Crisis of Brilliance which is the non-fiction account of the artists featured by Barker. The blurb says: “Stanley Spencer, Paul Nash, Mark Gertler, Richard Nevinson and Dora Carrington were five of the most exciting, influential and innovative British artists of the twentieth century. From diverse backgrounds, they met in the years before the Great War as students at the Slade School of Art, where they formed part of what their teacher Henry Tonks described as the school’s last ‘crisis of brilliance’.” I’m really looking forward to reading this.

From one art biography to another for my fifth link: Barbara Hepworth: Art & Life by Eleanor Clayton. My Mum bought me this for my birthday a couple of months ago and it really is a sumptuous read. We are planning to visit the Hepworth Wakefield museum next year, so it will be good to have read this first.

The introduction to Clayton’s book is written by Ali Smith, an author who I have come to love in recent years and this gives me my final link. I am currently listening to her essay collection Artful, which is absolutely fascinating. I particularly recommend the audio version, which is read by Smith herself and really gives a much better sense of her lyrical and innovative writing than one can get from the page.

So my chain this month goes from a thoughtful book about what it means to be alive to a thoughtful set of essays about life and art.

Next month the starting point is the wonderful Ethan Frome by Edith Wharton, Maybe see you then! 🙂 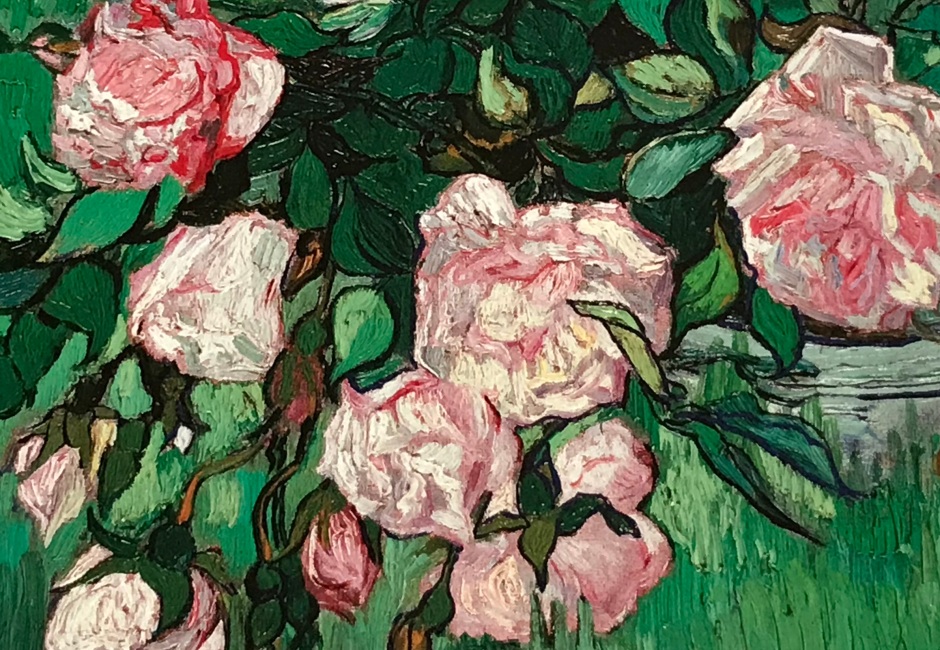 Here we are in February already.  The days are flying by, as they always do.  How important it is to stop amidst all the busy-ness and take a moment to notice.  Little things, like the sunshine pouring through these glass ornaments on my windowsill right now…… 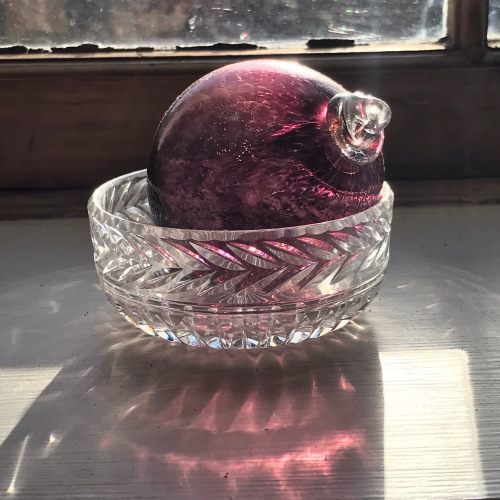 …….and the lovely play of light on these blue desk items: 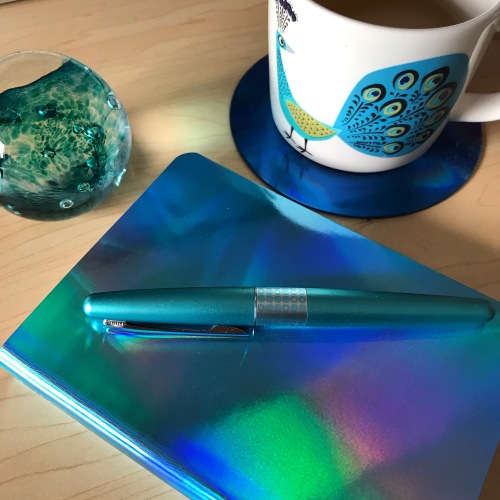 I am being helped this year in my daily noticing by my art calendar.  For several years now, my friend Becky has been writing about art, inspired in part by previous versions of this daily injection of joy.  This year I could not resist joining her! END_OF_DOCUMENT_TOKEN_TO_BE_REPLACED 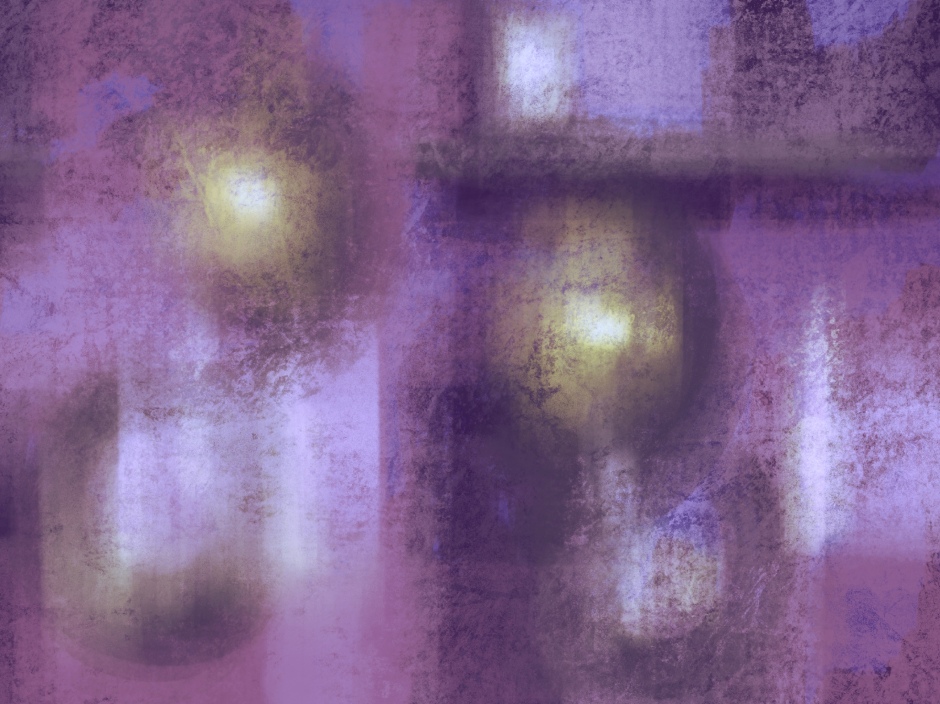 My holiday diary so far has celebrated the natural magic of the Orcadian landscape. Let me change tack awhile in this post to focus on the magic of creativity.

Stromness is Orkney’s second largest town.  It is a picturesque urban area with lots of interesting nooks and crannies, and a natural harbour from which you can sail to mainland Scotland: 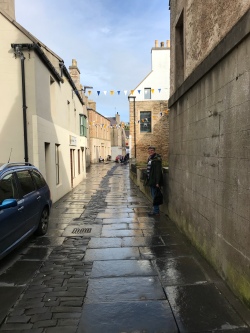 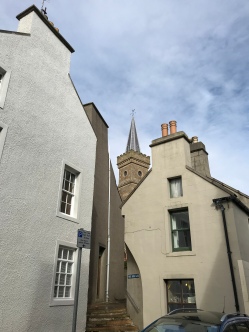 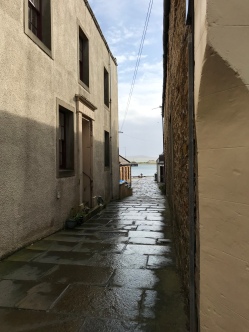 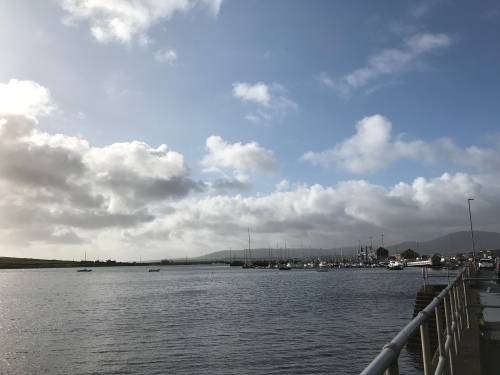 Walking along the main street, we came across the Pier Arts Centre, and decided to take a look. From the outside, it was not at all clear what we might find: 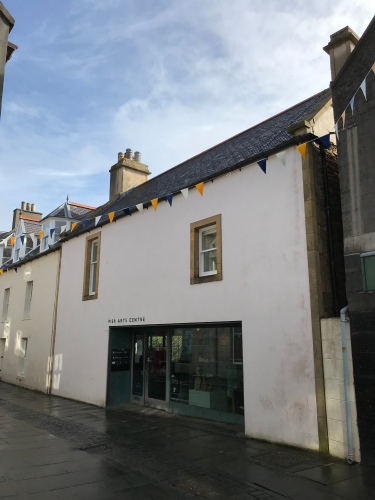 Incredibly, it turned out to be what artist Patrick Heron describes as “one of the most distinguished and perfect smaller collections of 20th century art on permanent display anywhere in the world”. Packed full of stunning artwork by modern British artists, this gallery is absolutely stunning.  The collection was initially established by a major donation by Margaret Gardiner who was a hugely important champion of British modern art, mainly through the middle of the 20th Century.

I took tons of photos and found it so difficult to pick a few for this post – everything seemed to be a favourite. So here are some of my favourite favourites, as it were (click to enlarge, and for captions): 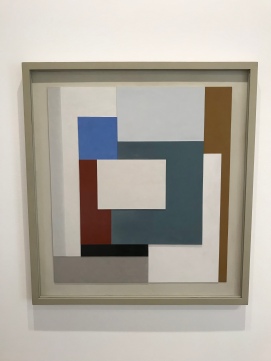 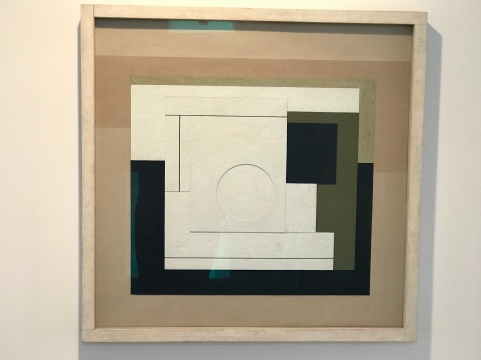 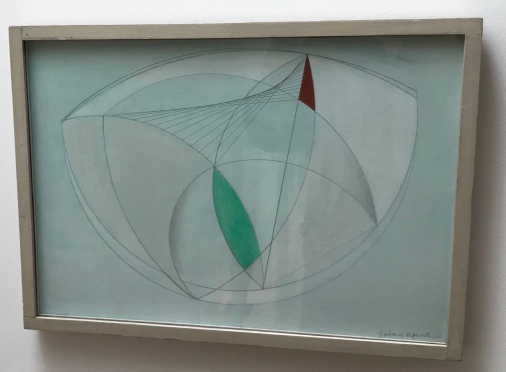 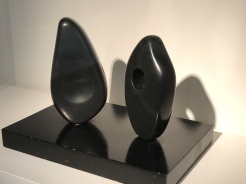 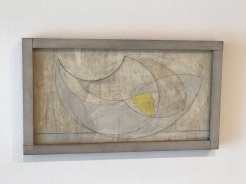 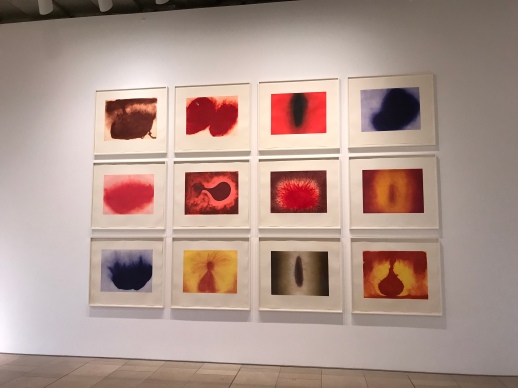 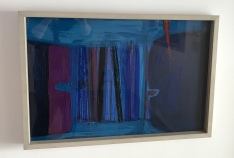 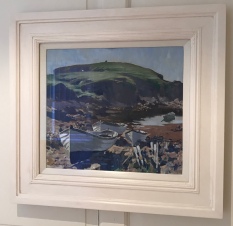 Stanley Cursiter: Geo at Yesnaby and Brough of Bigging (1924) 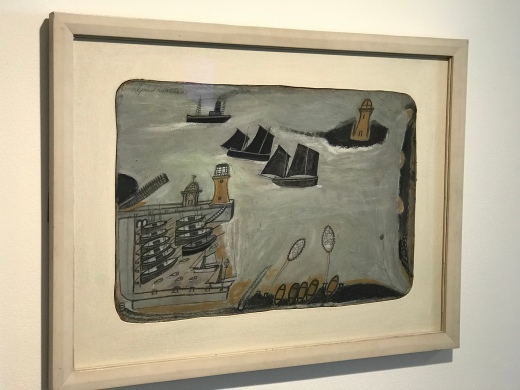 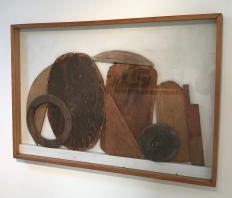 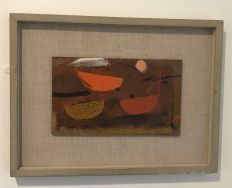 Experiencing this gallery is not just about looking at the collection: the building and surroundings are just as captivating: 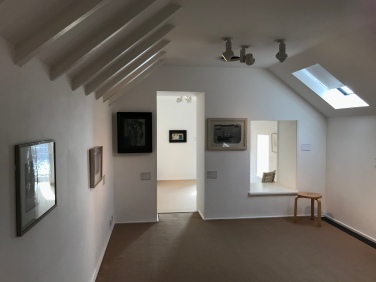 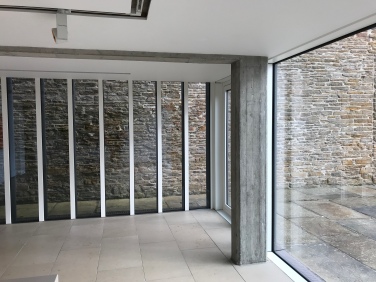 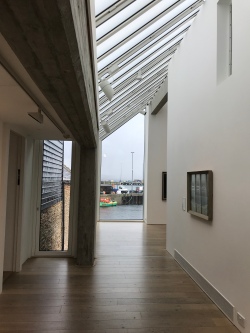 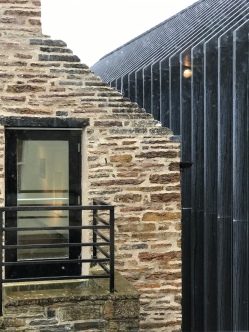 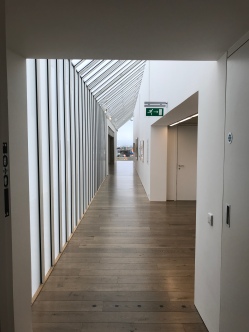 I loved all the textures, light and reflections, which drew together perfectly the interior and exterior.  In this picture by Alan Reynolds, you can see reflected the mask by Martin Boyce, and the harbour beyond. It seems particularly apt that the Boyce sculpture is called ‘Everything Is Outside’: 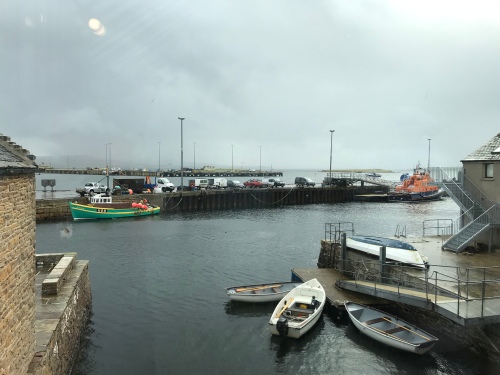 Back on the inside/outside theme, I also loved this brilliant Cursiter painting, which reflects the room in which it is hanging, as well as the street outside, in turn mirroring Cursiter’s painting Bernstane House, which hangs at right angles to the window: 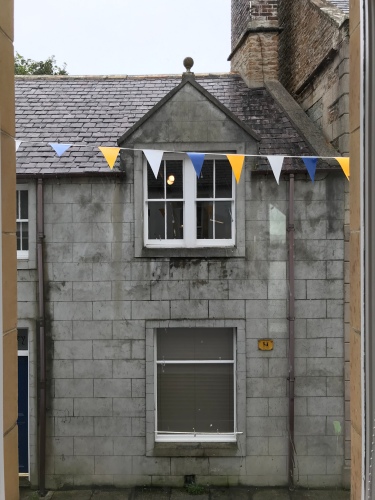 And finally, look at the exquisite placing of this Hepworth sculpture against the undulating shapes and colours of the water and kelp outside:

This gallery gives the viewer a totally immersive and highly memorable art experience, all for free which is amazing. Margaret Gardiner was visionary in her generosity – what an incredible woman she clearly was.  And everyone involved in presenting the collection, and running the gallery in general, are to be congratulated on a stunning achievement.

I have not even scratched the surface of the gallery’s riches in this post, even though it is very photo-heavy.  Plenty more can be seen on the gallery’s website which I highly recommend for more information about its 40-year journey and the collection.  And of course, this is a must-visit destination for anyone on the Orkney Mainland.

Finally, although I hesitate to do so in such august artistic company, I should note that the featured image at the top of this post is a digital painting by me, inspired by the colours of the following painting by Callum Innes.  Margaret Gardiner’s donation is described by the gallery as ‘an unfolding gift’. I feel privileged to have spent time in, and benefitted from, this amazing place of magical creativity. 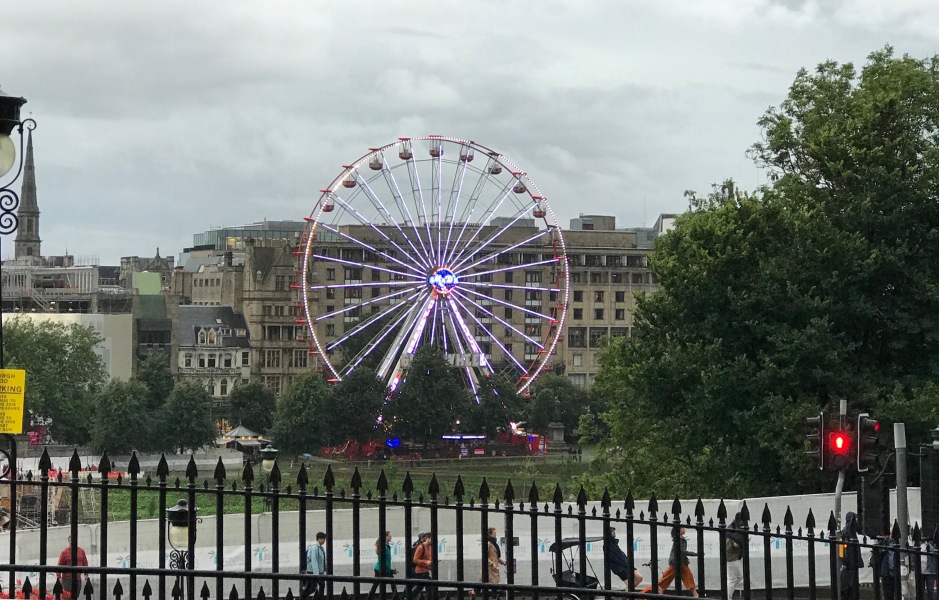 My Mum and I kicked things off this year with art-immersion over a couple of days.  We saw the City Art Centre’s stunning exhibition of Victoria Crowe’s work.  I wrote about my love of this artist here and here. It was wonderful to see some familiar paintings again, and plenty of new-to-me ones too.  Here is a screen-shot montage of some of the photos I took as we went around.  I love this collage display of colour and texture, which is the epitome of Crowe’s style: 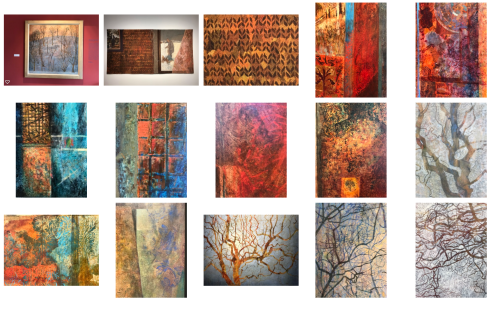